New Jersey is a hot spot for sea level rise, with far-reaching consequences for coastal communities, ecosystems, and the economy.

Sea level rise poses a threat to people and property in coastal areas around the world and is especially acute in New Jersey. Sea level at the Jersey Shore has risen about 18 inches since the early 1900s, more than twice the global mean of about 8 inches. Even more concerning, the rate of sea level rise is accelerating. Research conducted at Rutgers University indicates that global sea level rise in the 20th century (about 0.5 ft/century) was the fastest in at least 3,000 years. The rate over the last quarter century (1.0 ft/century) was about twice as fast.

WHY IS SEA LEVEL RISING?
Heat trapped by greenhouse gases in the atmosphere is absorbed by the oceans, causing seawater to expand. Scientists call this process “thermal expansion,” and it’s responsible for about 40% of global sea level rise in the last 25 years.

The problem is compounded in New Jersey by at least two other factors unrelated to climate change. In what amounts to a geologic seesaw, the mid-Atlantic region is subsiding, or sinking, while land to the north once covered by Ice Age glaciers rises up. Pumping large amounts of water from aquifers also adds to the sinking of New Jersey’s coastline.

HOW HIGH WILL SEA LEVEL RISE?
Projecting the magnitude and rate of sea level rise in the coming decades is a challenging task. Much depends on future greenhouse gas emissions and subsequent global warming. Scientists are also intensively studying Greenland and Antarctica to better understand the dynamics of melting ice sheets and the possibility that they are approaching the point of irreversible, catastrophic meltdown.

HOW IS SEA LEVEL RISE AFFECTING NEW JERSEY?
While it’s impossible to pin down the exact level of future sea level rise, there’s no doubt it’s already having serious consequences along the coast. Of these, flooding is perhaps the most obvious and impactful.

In some cases, coastal flooding is the result of storm tide, which is the total observed seawater level during a storm, resulting from the combination of storm surge and the astronomical tide. Because of sea level rise, storm tides start at a higher baseline and push seawater farther inland. Hurricanes Sandy and Irene are all-too-vivid illustrations of just how destructive and potentially deadly storm tides can be.

In addition to flooding, sea level rise degrades coastal ecosystems. The inland advance of seawater has transformed once thriving woodlands into “ghost forests” of leafless branches and fallen trees and can threaten water supplies just inland of this transition zone. Marshes – a vital marine nursery and natural buffer against flooding – are being drowned by rising waters and are often unable to “retreat” inland because of existing development. Coastal farmland exposed to salt water is less productive. And shoreline erosion scours beaches, one of the Garden State’s most lucrative tourist attractions. 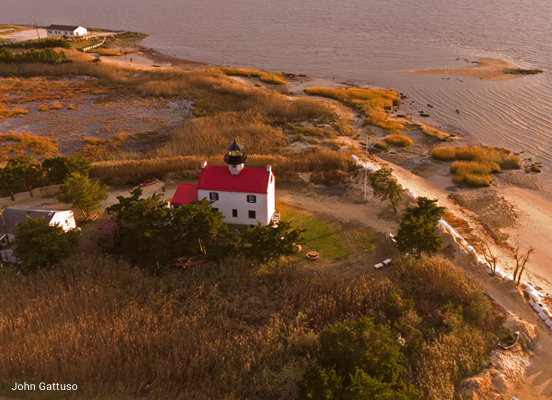 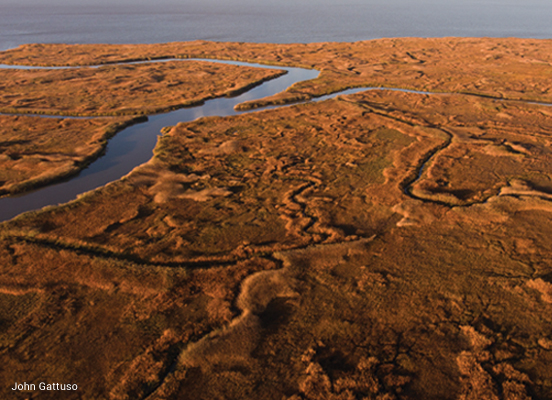 Erosion threatens the historic East Point Lighthouse on the Delaware Bayshore (left). Coastal marshes tend to “retreat” inland as sea level rises but are blocked by existing development in many places along the densely populated New Jersey coast (right).

WHAT CAN WE DO?
While major storms like Hurricane Sandy have increased awareness of climate change and sea level rise, there is still a need to educate coastal decision-makers and the general public about flood risks, disaster preparedness, and climate adaptation. Resilience planning is essential at both the state and local levels and must address the needs of all residents, including the most vulnerable, who are likely to suffer disproportionately from the adverse effects of climate change. Providing practical options for planners and practitioners to incorporate science into risk-based decision making is a critical step. The sooner we act to reduce greenhouse gas emissions and prepare for sea level rise, the lower the risk will be.