New Jerseyans Are Concerned But Lack Knowledge About Climate Change

RUTGERS-EAGLETON POLL – Two-thirds of New Jerseyans are concerned about the impact that climate change will have on them, according to the latest Rutgers-Eagleton Poll conducted in collaboration with the New Jersey Climate Change Alliance at Rutgers University.

Thirty-seven percent say they are “very concerned” about the effects of climate change on their life or family members and the people around them. Another 30 percent are “somewhat concerned,” and the remaining third is “not very” (15 percent) or “not concerned at all” (18 percent). 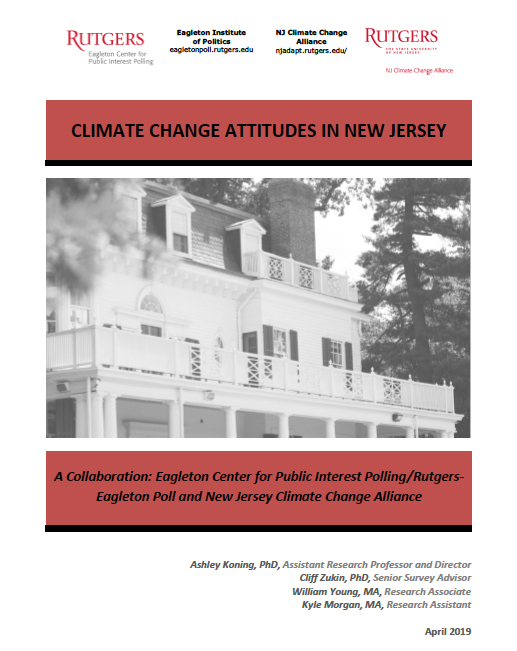 Moreover, New Jerseyans have varying levels of knowledge about different aspects of climate change. Almost four in ten say they know “a lot” about its causes (37 percent) and its impact on the environment (38 percent); a third (32 percent) say the same about climate change’s effect on the future, and one in five (22 percent) say the same about how to prepare. About three in ten say they know only a “little” or “nothing at all” about the first three components; four in ten have little or no knowledge about how to prepare.

Residents are most likely to say they “frequently” get information about climate change from the mass media (53 percent), followed by social media (29 percent) and other people (18 percent). Just one in ten cite “frequently” getting news from their local community organizations or state government.

“These results underscore the challenges that New Jersey and other states face when addressing climate change,” said Jeanne Herb of the Rutgers Bloustein School of Policy and Planning and the New Jersey Climate Change Alliance at Rutgers University–New Brunswick. “Most New Jerseyans show some concern about climate change but are uncertain of how to address it both personally and through public policy.”

Residents are hesitant to reach into their own pockets to pay for remedies. Only 6 percent feel residents should fund efforts to address climate change through a charge on their utility bills; 45 percent each say residents should pay a minor share or no share at all.

A majority is also against paying more in taxes to make infrastructure in the state more weather resistant (54 percent against, 40 percent in favor). There is general support, however, for helping those whose homes were damaged by extreme weather to relocate or rebuild – especially for those living in lower- and middle-income areas. But New Jerseyans are split when it comes to whether the government should have the power to prohibit homeowners from rebuilding in flood-prone areas in the first place (50 percent should, 43 percent should not).

“Views on climate change are starkly divided by partisanship and other key demographic factors,” said Ashley Koning, assistant research professor and director of the Eagleton Center for Public Interest Polling (ECPIP) at Rutgers University–New Brunswick. “Some groups are much more concerned than others, and this concern drives knowledge, access to different types of information, and support for related initiatives. Yet no matter the level of concern, New Jerseyans across the board are against personally paying for most solutions – symptomatic of their larger dissatisfaction with taxes and cost of living in the Garden State.”

New Jerseyans are amenable, however, to paying an additional 50 cents on their monthly electric bill if it means helping low-income households make their homes more energy efficient: 28 percent would “strongly support” and another 27 percent “somewhat support” doing so.

A majority of New Jerseyans support more local activity regarding climate change. By a margin of 57 percent to 6 percent, residents feel their mayor and local government should be doing more rather than less to reduce the effects of climate change. A quarter say they are doing enough already.

When it comes to helping the environment through future vehicle purchases, about one in five residents say they would seriously consider buying an electric car in the near future. Among those who would not, the main barrier is charging capabilities. Fifty-six percent cite the fear of running out of power on the road as a major reason; another 17 percent say it is a minor reason for their hesitation to purchase. Similar numbers point to the lack of a place to charge their car at home (44 percent say it’s a major reason, 17 percent say minor).

Results are from a statewide poll of 1,008 New Jersey adults contacted by live callers on landlines and cell phones from March 29 through April 9, 2019. The sample has a margin of error of +/-3.5 percentage points. Interviews were done in English and, when requested, Spanish.

10 Years After Hurricane Sandy: What’s Next for the Jersey Shore?

‘Every Time It Rains’: Floods from Climate Change Plague a Camden Neighborhood