Climate change will have wide-ranging impacts on public health. Vulnerable populations will be affected disproportionately.

Climate change will intensify certain existing medical threats, present new ones, and, in some cases, make access to health care more difficult. And while everybody in New Jersey will be affected, some groups — such as the elderly, the sick, the poor, and some communities of color – will be at greater risk than others.

HEAT STRESS
As temperatures warm and heat waves become longer and more frequent, the incidence of heat-related illness is likely to increase. Heat can exacerbate chronic health conditions, including cardiovascular and respiratory diseases. Studies have shown that hot days are associated with an increase in medical services for heart and lung conditions, renal failure, electrolyte imbalance, kidney stones, fetal health, and preterm birth.

Urban “heat islands” are expected to be hardest hit. Cities can be considerably warmer than suburban or rural areas due to the lack of tree cover and the abundance of paved surfaces. People without air conditioners face additional exposure to heat stress as do construction workers, seniors living alone, athletes, and children playing outdoors.

AIR QUALITY
Heat also degrades air quality. Sunlight and high temperatures, particularly in summer, accelerate the production of ground-level ozone, which can irritate the lining of the lungs, trigger asthma, and aggravate respiratory diseases like chronic obstructive pulmonary disease (COPD), and bronchitis. An increased use of air conditioners during heat waves can generate additional emissions (if their power supply is from fossil fuels), including a form of air pollution known as particulate matter – a mixture of sulfate, nitrate, carbon, dust, and other substances released mostly by the burning of fossil fuels. Particulate matter has been associated with elevated rates of respiratory and cardiovascular disease as well as premature mortality. Urban areas tend to be disproportionately impacted by ground-level ozone and particulate matter due to the concentration of heavy industry and motor vehicles. The combination of heat stress and poor air quality is especially risky for vulnerable populations such as children, the elderly, the economically disadvantaged, and people with asthma and certain other chronic health conditions.

Forest fires are also expected to increase with climate change and emit additional particulate matter and ozone precursors into the atmosphere. New Jersey’s Pinelands region is especially vulnerable. In fact, a Pinelands fire in 2019 scorched more than 11,000 acres.

Allergy sufferers are likely to feel the impact of higher pollen counts. An extended growing season, warmer temperatures, and an increase in atmospheric carbon dioxide (which promotes plant growth) are likely to boost pollen production and potency and intensify allergy and asthma symptoms. Extreme rainfall, flooding, and warming temperatures can also foster the growth of indoor fungi and molds, with increases in respiratory and asthma-related conditions.

VECTOR-BORNE DISEASE
As the climate warms and weather patterns shift, the range and abundance of certain disease vectors are expected to change, altering our exposure to ticks carrying Lyme disease and mosquitoes that transmit West Nile, chikungunya, and Zika, among other pathogens. Abundant moisture in late spring and early summer is associated with Lyme disease transmissions. As the climate changes, this may shift the risk of Lyme transmission several weeks earlier. Heavier rains and flooding provide mosquitoes plenty of standing water in which to lay their eggs, and species such as the Asian Tiger mosquito, already widespread in New Jersey, is of particular concern given its propensity to bite people.

EXTREME WEATHER
Hurricane Sandy was a painful demonstration of the toll extreme weather, flooding, and power outages can take on public health. The storm caused 34 deaths in New Jersey and 117 in the U.S. overall, mostly from drowning. Other health issues related to extreme weather include carbon monoxide poisoning from improper generator use, mold and mildew exposure in water-damaged buildings, and an increase of stomach and intestinal illness. Heavy rains and flooding put communities at risk of water contamination caused by antiquated sewer systems designed to release sewage overflow into waterways. New Jersey has more than 200 of these “combined sewer” outfalls in its largest and oldest cities, including Newark and Jersey City. Disruptions in power and transportation and displacement of residents after a storm can hinder access to medications or treatment of chronic conditions. 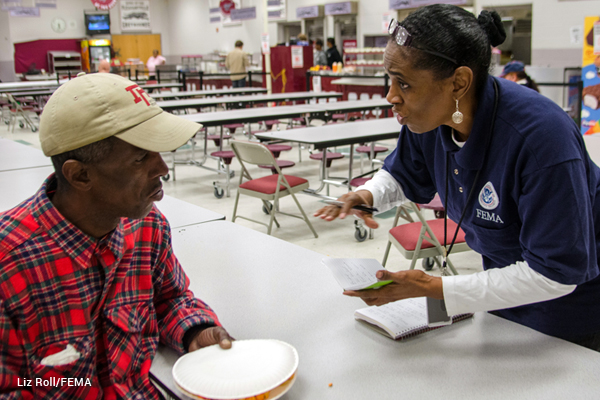 Emergency shelter in Pleasantville (above) and damaged home in Ortley Beach (right) after Hurricane Sandy. 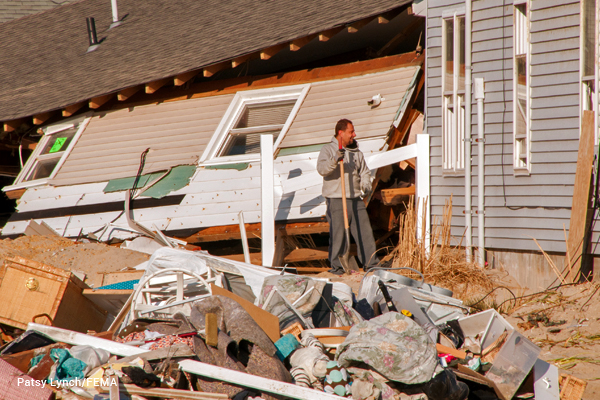 MENTAL HEALTH
It’s not surprising, perhaps, that people who have experienced natural disasters are prone to stress-related conditions such as anxiety, depression, and post-traumatic stress disorder (PTSD), putting additional strain on social relations and affecting physical health. A longitudinal study of Hurricane Sandy victims, for instance, found that housing damage from the storm is associated with a risk of PTSD, and children living in homes with minor storm damage were more likely to be sad or depressed or to have problems sleeping than were children from undamaged homes.

VULNERABLE POPULATIONS AND HEALTH EQUITY
It’s important to keep in mind that the impacts discussed above aren’t mutually exclusive. They can occur in any combination or sequence; their effects are often cumulative; and they tend to fall hardest on vulnerable populations such as people with pre-existing medical conditions, the very young, the elderly, and communities whose socio-economic marginalization – including people of color, immigrants, non-English speakers, and the poor – leaves them with fewer options to respond. These are the same populations that have been historically underrepresented in political systems, leading to underinvestment in communities, inadequate legal protections and authority, and a lack of a voice in social, economic, and civic outcomes. Such inequities result in cumulative stressors, including increased health disparities among the same populations that are most affected by changing climate conditions.

Location makes a big difference, too. People who live in floodplains are at greater risk of flooding due to heavy downpours or storm tides if they live in coastal areas. Cities tend to be warmer, with poorer air quality, aging infrastructure, and a legacy of industrial contamination.

It’s not difficult to understand how people with multiple, often compounding vulnerabilities will find themselves at greater risk of climate-related health impacts and with fewer resources to remediate their situation. Addressing such vulnerabilities is an essential component of climate action planning and can produce a host of additional benefits for the well-being of New Jersey residents, ranging from improvements to energy, water, and transportation infrastructure to cleaner air, water and soil, better maintained green spaces, more walkable communities, savings in health-care costs, and an overall better quality of life.