What Is Ocean Acidification?

And how will it affect New Jersey?

Ocean acidification is often described as climate change’s “equally evil twin.” Like climate change, the principal cause of acidification in the open ocean is an increase in atmospheric carbon dioxide (CO2), with potentially harmful ecological and economic consequences.

Carbon dioxide gas dissolves rapidly in seawater, setting off a chemical reaction that lowers pH and makes seawater more acidic. The ocean has absorbed roughly 30% of global CO2 emissions since the beginning of the industrial era, lowering average ocean pH by 0.1 units – equal to a 30% increase in acidity. If CO2 emissions continue at current rates, ocean pH levels are expected to fall another 0.3 to 0.4 pH units by the end of the century, representing an additional 120% drop and creating an ocean that is more acidic than at any time in the past 20 million years.

Acidification makes it more difficult for marine creatures such as oysters, clams, scallops, lobsters, and crabs to create shells. It can disrupt reproduction, growth, and metabolism in both shell-forming and non-shell-forming species and can leave marine organisms more vulnerable to disease, predation, and climate-related impacts such as warming waters.

A NOAA video illustrates the effects of elevated CO2 on a tiny pteropod or “sea butterfly.”

WHAT’S AT STAKE IN NEW JERSEY?
Ocean acidification has the potential to disrupt New Jersey’s marine ecosystem, particularly fisheries, and the communities that depend on fishing and aquaculture for their livelihoods. While New Jersey isn’t seeing significant impacts yet, ocean acidification is regarded as an emerging threat due in part to the importance of fishing and aquaculture to the state’s economy.

UNDERSTANDING THE CONSEQUENCES
While much is known about ocean acidification generally, the impacts of acidification on many species commonly found in New Jersey waters and on the marine ecosystem as a whole remain largely uninvestigated.

Numerous studies have looked at the effects of acidification on eastern oysters, but the literature is sparse, if not altogether absent, on other commercially important species. Only one laboratory study focuses on acidification and sea scallops, New Jersey’s most valuable shellfish harvest, and only two acidification studies have been conducted on ocean quahog, blue crabs, summer flounder, and longfin squid. Indeed, of the 35 managed species in the mid-Atlantic region, 69% (24 species) have not yet been investigated for acidification impacts, including Atlantic surfclams, Atlantic mackerel, Atlantic menhaden, black sea bass, bluefish, and horseshoe crabs. 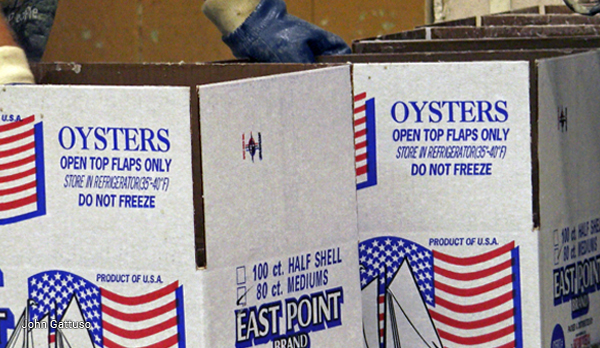 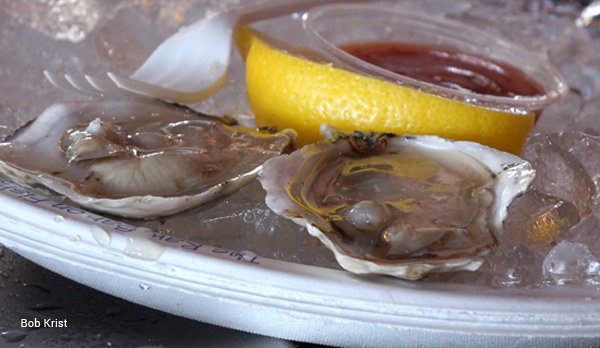 New Jersey oysters packed for shipping (left) and served at a Cape May restaurant (right). Commercial fishing and aquaculture contribute more than $1 billion annually to the state’s economy.

ADDITIONAL STRESSORS
Ocean acidification doesn’t happen in isolation. It occurs against the backdrop of other climate-related impacts such as warming temperatures and algal blooms that amplify acidification and add to the stress on marine life, especially in coastal waters. An increase in heavy downpours, for example, flushes naturally acidic freshwater into the ocean as well as pollutants such as fertilizer and wastewater that stimulate excess algae growth. The algae eventually die and are consumed by bacteria, which deplete oxygen in the water, leading to a dangerous condition known as hypoxia. The process also releases carbon dioxide, which, in turn, increases acidification. Periodic upwellings of deeper, colder, more acidic water are an additional source of acidification near the coast.

WHAT CAN BE DONE?
More monitoring and research are needed to better understand ocean acidification and its impacts on the marine ecosystem and economy. And because the ocean doesn’t stop at New Jersey’s borders, coordinating with scientists, policy makers, and other stakeholders throughout the mid-Atlantic region and beyond is essential for crafting an effective response.

Like climate change, the key to mitigating ocean acidification over the long term is to dramatically reduce carbon dioxide emissions by transitioning to renewable energy, practicing climate-smart agriculture, using sustainable building materials, eating a climate-friendly diet, and much else. Reducing the influx of land-based pollutants into the ocean, which has the additional benefit of reducing harmful algal blooms and hypoxia, will help reduce acidification in the near-shore environment, as will protecting and restoring “carbon sinks” such as salt marshes. In the meanwhile, much work remains to expand awareness of ocean acidification among policy makers, researchers, the fishing industry, and NGOs, and explore ways to help ocean-dependent communities adapt to changing conditions.

This work was made possible with financial assistance from the Coastal Zone Management Act of 1972, as amended, as administered by the Office of Coastal Management, National Oceanic and Atmospheric Administration’s Program through the NJ Department of Environmental Protection, Coastal Management Program.