The effects of climate change are being felt around the world, and New Jersey is no exception. Residents of the Garden State are experiencing heavier rains, warmer temperatures, and more coastal flooding, and scientists expect these trends to continue through this century.

Climate change impacts will touch virtually all aspects of life in New Jersey and will be especially challenging to the elderly, the disabled, low-income people, certain communities of color, and other vulnerable populations. Longer, hotter summers will exacerbate health conditions such as asthma, heat stress, and allergies, and diseases carried by ticks and mosquitoes may become more common.

Infrastructure – already stressed by age and heavy use – will be taxed by severe weather events, heat, and precipitation, as will industries such as agriculture that depend on natural resources. And because business in New Jersey is linked to global markets, our economy is prone to climate-related disturbances well beyond our borders.

WARMING AND PRECIPITATION
Warming is one of the principal indicators of climate change, and, broadly speaking, New Jersey has followed the global trend. The annual mean temperature in New Jersey over the last century has increased 2.9°F. In general, summers are longer and hotter. Winters are shorter and warmer. The 13 warmest years have occurred since 1990; 2012 was the warmest year on record.

Precipitation patterns have changed, too. Although precipitation varies year to year, total precipitation has trended upward 2.9 inches per century since about 1900, and 2018 was the wettest year on record. There are more intense downpours and a greater risk of flooding along inland streams and rivers. Sea level rise, caused mainly by ocean warming, is triggering more intense and frequent coastal floods during storms and causing so-called sunny day floods during normal high tides. Despite an increase in overall precipitation, periodic dry spells are expected to continue and may become more frequent. 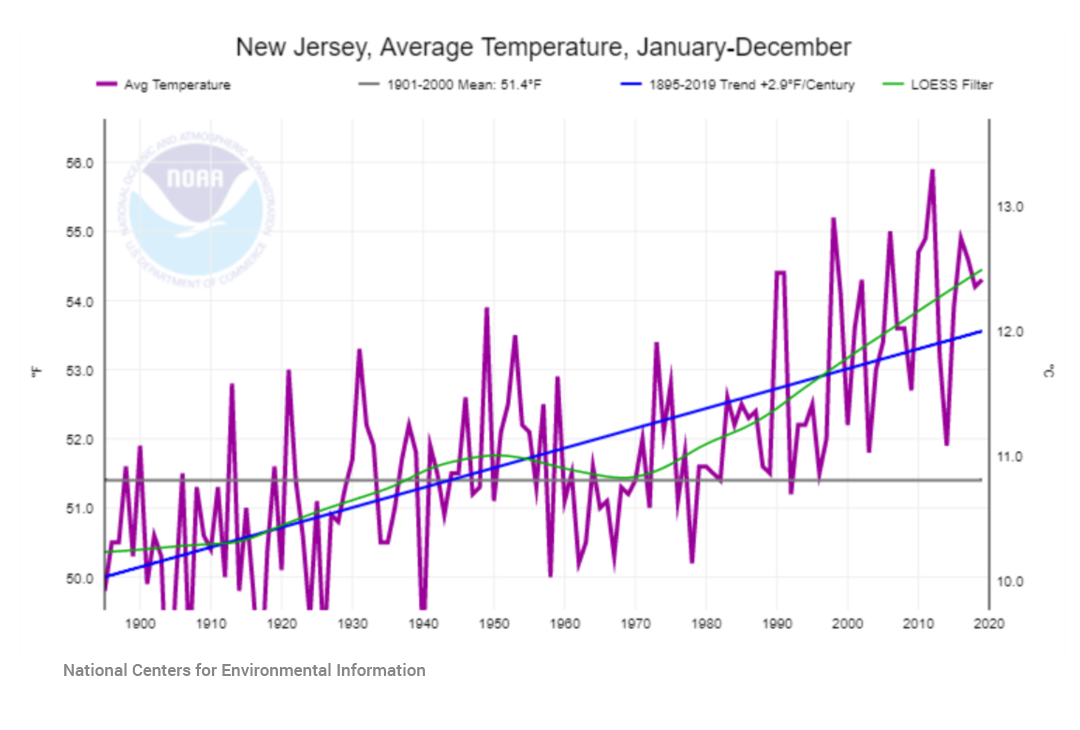 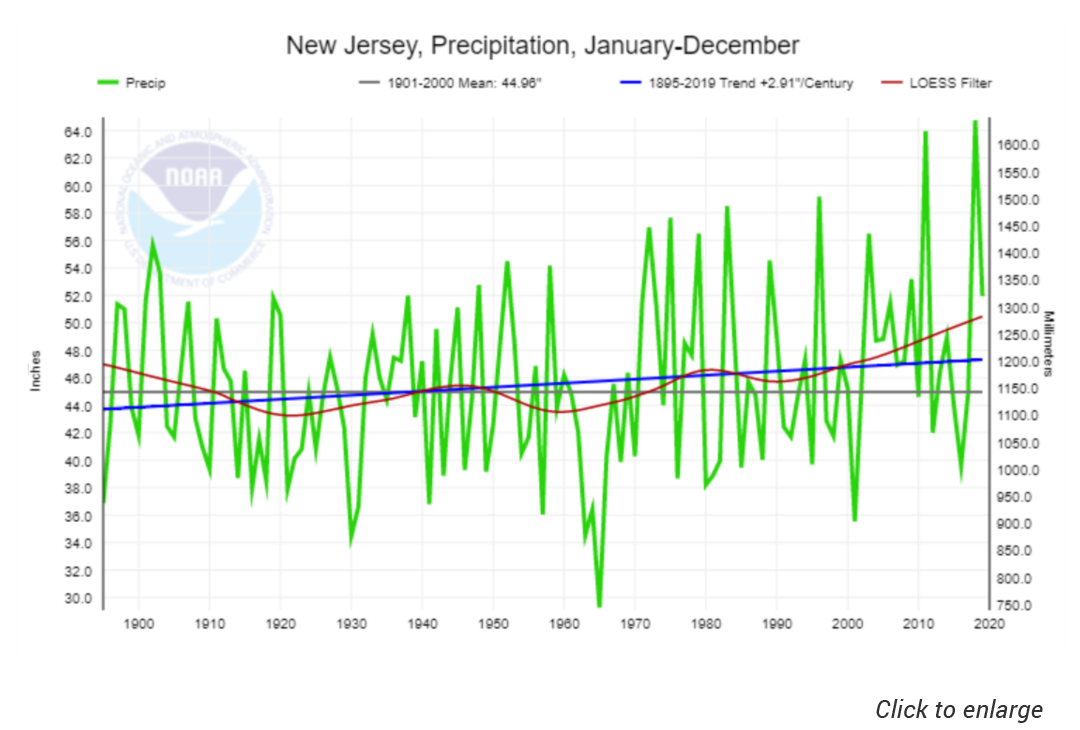 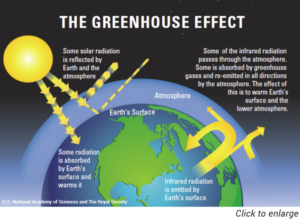 WHAT CAUSES CLIMATE CHANGE?
The primary cause of climate change is the buildup of carbon dioxide and other “greenhouse gases” in the atmosphere. Carbon dioxide is released by the burning of fossil fuels and certain other human activities such as forest clearing. Scientists have long known that carbon dioxide absorbs infrared radiation from the sun, making it more difficult for heat from Earth to radiate into space. According to the Fourth National Climate Assessment, carbon dioxide in the atmosphere has increased from approximately 270 parts per million (ppm) during pre-industrial times to well over 400 ppm – “levels that exceed any observed over the past 800,000 years.”

Here in New Jersey the principal sources of greenhouse gases are transportation, followed by electricity generation and fossil fuels used in residential, industrial, and commercial sectors. Other heat-trapping gases such as methane and nitrous oxide contribute to global warming and are also tied to human activity.

WHAT ARE WE DOING ABOUT CLIMATE CHANGE?
In 2015 nearly every nation in the world committed to the goals of the Paris Agreement to prevent the worst risks of climate change by keeping global temperature rise in the 21st century under 2°C above pre-industrial levels. Achieving this goal will require dramatic cuts in the use of fossil fuels and the expansion of “carbon sinks” like forests and marshes that remove carbon dioxide from the atmosphere and store it in plants and soil. The Paris Agreement also calls on countries to bolster their capacity to adapt to the unavoidable effects of climate change by, for example, hardening the resiliency of critical infrastructure and addressing the needs of vulnerable populations.

In New Jersey there is a statutory limit on greenhouse gas emissions – the 2007 New Jersey Global Warming Response Act – which establishes a goal to reduce emissions 80% below 2006 levels by 2050, or approximately 75% from today’s level. In May 2018, Gov. Phil Murphy issued an executive order committing New Jersey to 100% clean energy by 2050.

Meanwhile, efforts to prepare for expected climate impacts are under way throughout New Jersey, ranging from scientific research and resilience planning to reconfiguration of physical assets like energy, transportation, and water infrastructure.